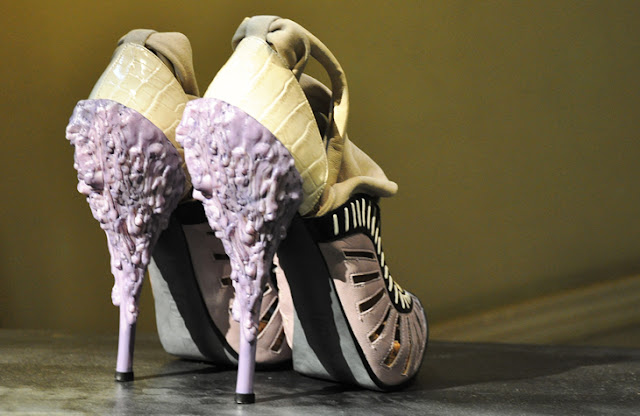 Nicholas Kirkwood graduated from Central Saint Martins and immediately found work in the studio by Philip Treacy. But not satisfied, he returned studying footwear design at Cordwainers College.
In the spring of 2005 launched his own line, not being gone into production has gathered many positive reviews and has enjoyed great success by celebrities who felt in love with his creations.
Since the s/s 2009 he collaborated with Rodarte that creates real works of art, then it will be the turn of Pollini, Erdem and Peter Pilotto.
Meanwhile, he also designed some jewelry collection for Atelier Swarovski S / S 2010, the collaboration has excited himself so much that in future he could launch his own line of jewelry.

Want to know more about Nicholas Kirkwood?
So enjoy this interview by Jane Aldridge!


If you weren’t a shoe designer, what would you be doing?
I think I would still be doing another type of product design. I was always interested in architecture but I didn’t want to be in college for seven years. It could have easily been furniture design too I think. After doing fine art at college and then doing an internship at Phillip Treacy, I really felt that accessory design was my calling.
Your shoes have a very animalistic, predatorial feel to them. They often look like they’re about to pounce. Is that intentional?
It’s not necessarily intentional, but I see what you mean. I think I would say they’re aerodynamic, I try to put a little bit of movement in the shoe. I haven’t thought about it that way but its much more dynamic!
I have to ask, were your parents super proud of you when you won the British Fashion accessory award?
Yes, they were, they’ve been very supportive of me since the beginning. They’ve watched it grow and of course they were delighted! They both came to the ceremony.
Does your mom wear your shoes?
She had them–she wears my flat shoes! I have started doing some lower heels but they aren’t quite low enough for her.
What music do you listen to when you design shoes?
I wait until everybody is out of the office so I can play really noisy music with guitars!
What is the most challenging part of being a shoe designer?
Juggling  time! I’m in Italy three days a week. It’s a struggle finding time to actually design. Something always comes up. I’ve only had one week’s vacation in seven years. Time is definitely the biggest challenge.
Do you have a favorite shoe you’ve ever designed?
It keeps changing. You think you’ve designed your favorite shoe, and then something better comes along. If I ever design what I think is a perfect shoe, then I’d just stop designing. What would be the point of making worse shoes after that? I want the look to evolve constantly.
Who is your favorite shoe designer besides yourself?
I’d say Andre Perugia, Rogier Vivier and Ferragamo because for the periods they were designing inthey were doing things that had never been done before. They really pushed the boundaries of technology and shape for their time.
What are you doing in Dallas, besides going to the rodeo?
Haha, we came for the rodeo! No, we came to visit a couple of stores–we’re touring the states trying to visit as many of the stores who carry us as possible. For two weeks I’ve been in a plane almost every day! Next up is Chicago.
I’ve noticed that you like to mix the materials you work in. What materials are you working i right now?
When I started out I was into using unusual materials more, I use less of a mix now and focus more on customizing the materials I do work in. For example, screen-printing or laser cutting or customized textiles. None of these are new techniques but it helps make sure that it’s not going to be what anyone else is doing.
Last question: if you could ban one shoe, what would it be?
Where do I start?? Let’s leave it at crocs and high heel sneakers!
——————————————————————————————————-